BY GRACE is the second book in the Huachuca Trilogy. When Grace Pelham, an orphaned storekeeper’s daughter from Albany, sets out for New York City to pursue her art, she meets up with people on board the Mary Alice who will  influence her. The Schuyler family includes Eric and Gertrude and their young twin sons, Bertie and Charlie. Grace is drawn to Eric who causes new, uncomfortable sensations. She is later surprised by an invitation to the very wealthy Schuylers’ Christmas Eve Ball.  Grace accepts.

Dinner was a long affair with good food and good talk. Grace looked once or twice to the head table to catch a glimpse of Eric, Gertrude or his parents. Soon, both couples were circulating around the room, stopping at one table or another to speak briefly with each group.

Watching them, Chastity cocked an eye at Grace, and spoke softly. “All society knows  Gertrude is wildly jealous of her husband. She keeps an eagle eye on any attractive woman who comes within shouting distance of him.” Grace looked appalled. “It’s amazing you have gotten this close. Beware of her fangs!”

Before Grace could respond, the Schuylers were nearing the table. She thought of excusing herself to head to the powder room and then decided that would be too obvious a snub. Instead, she gathered her wits and prepared for another encounter with Gertrude and her barbs.

“Dancing will start in the main ballroom in a short while,” said Gertrude. “I hope you will find this new orchestra appealing.” Gertrude put a good face on things, having sheathed her slings and arrows

“But first, we’ll have some carolers from Epiphany School serenade us and sing us into the ballroom,” added Eric, just as the sound of “Deck the Halls” resounded from the entry.

The grandeur of the dining room had impressed Grace with its flocked and silvered wallpaper hung above cherry wainscoting, drapery of fine silk and delicate crystal chandeliers. The ballroom nearly took her breath away.

“I had the same reaction when I first saw this room,” whispered Chastity. “It makes me think of Cinderella and her prince.”

The highly polished floor of intricate parquet spread out before them. Immense fireplaces sat in the east and west walls of the room, each big enough to fit a foursome for a game of whist. Silver and gold garlands hung throughout the room and reflected the light from chandeliers and wall sconces. Several chandeliers tinkled in a breeze from the opened doors on the south side of the room. A Christmas tree, easily twenty feet tall, glittered in one corner. Hand painted ornaments retold the Christmas story while star-held-candles sat on the tree’s branches. 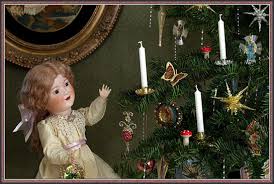 “I think I have died and gone to heaven,” Grace whispered to Chastity as they moved across the vast room. Their little dinner group stayed together with the men making places for the ladies on the brocaded settees and tiny chairs along one wall.

The Epiphany choristers gathered near the tree and ended their performance with a medley of traditional carols and then slipped out the side doors and were gone in a flash. From an overhead gallery, a large orchestra immediately began a waltz to entice dancers. Both Schuyler couples moved onto the dance floor and met with applause as they dipped and twirled about the room. In moments, the floor was full of couples, young and old, slim or stout, all showing their enjoyment in smiles and trills of laughter.

Grace’s dance card was soon filled with the promise of a long evening. She was glad for the lessons at Mrs. Thompson’s Dance Academy that she had begged from her father. At times, she scarcely learned her partner’s name before she was whisked away by the next. When a break in the music came, she found Chastity locking arms and leading her to the balcony. A maid stood at each door to offer wraps to the women who sought to take the air. All along the terrace, men and women were resting from their exertions on the dance floor and chatting or flirting with their companions.

“Good, here come Ralphie and Bob Warren with drinks for us,” said Chastity

As the foursome downed the cool champagne punch, Gertrude and Eric came out on the balcony. Eric had his arm about his wife’s shoulders and was talking to her with deep concentration. Grace felt a knot form in her stomach as she watched them. Gradually, they  forfeited their privacy as guests vied for their attention with compliments and congratulations on the fine party.

Chastity nudged her, “A penny for your thoughts.”

She was saved from answering when a drum roll called the dancers back inside to find Santa and his elves gathered near the tree. With many a “ho, ho, ho,” Santa began calling ladies to his side. To each he gave a gift, carefully wrapped in silver and gold foil. When Grace’s turn came, she approached and recognized “Santa” as Eric’s father.

“And are you having a good time, m’dear?”

“Yes, Santa and I have been a good girl all year.”

Santa beamed. “That’s what I wanted to hear. Now, here’s your reward. Enjoy!”

On returning to her friends, Grace opened the slim envelope to find a membership card for the Museum of Art resting inside. She looked up to find Eric watching her from across the room. She nodded her thanks, and saw by his answering smile that the gift had been his doing. Beside her, Chastity found a silver pen in her gift box.

“I wonder how Santa knew of my poetry attempts!”

The evening whirled on with surprise after surprise. The season’s opera diva made an appearance and sang her famed aria. Teddy Roosevelt, so recently back from Cuba, rumbled in after midnight, in good time for the light buffet. A duo of flamenco dancers entertained, their lightning steps and graceful maneuvers putting the audience to swaying. Jugglers dressed as court jesters kept balls flying.

By four in the morning, Grace was sure she couldn’t drink more champagne, dance another dance or eat another morsel. She knew from Chastity that the Schuylers would serve breakfast at six for the diehards who remained. She intended to be in her bed by then. Taking leave of her friends and refusing offers of an escort back to The Lily Hotel for Ladies, Grace made her way to the entry where she asked for her things and her ride home.

Grace slept in late on Christmas morning, her head full of memories and dreams. She kept to her room most of the day, thinking back to Christmases past and drawing her visions of Albany, the store, the apartment and the town. At two o’clock, over a fresh cup of tea, she drew a random mark that evolved into the outline of a man’s head. It took shape and became her father’s image. Not a picture of his last days, but from her childhood when health and hope were still his. She caught his essence in the finished work, as her tears swelled to the surface.

I hope you enjoyed this excerpt from BY GRACE.  Watch for its publication in the coming year as Grace flees NYC in fear for her life and makes her way West.